138. The Dog and the Jackal at the Wedding Feast

“There’s a wedding feast next door!” Dog told Jackal.
“Let’s go!” said Jackal.
They crept through a narrow gap in the fence and raided the kitchen.
Dog ate non-stop, but Jackal kept returning to the fence, making sure he could still get through.
Then the cook arrived. “I’ll beat you to death, thieves!” he shouted, grabbing a stick.
Jackal escaped, but Dog was too fat. He was trapped!
The cook beat Dog until he was dead and threw the corpse over the fence.
But Dog wasn’t dead! He opened his eyes and limped away. “That was worth it,” he thought, smiling.
[a Hausa story from northern Nigeria]
Inspired by: "The Jackal and the Dog at the Marriage Feast" in Fifty Hausa Folktales (published in Folklore) by A. J. N. Tremearne, 1910.
Notes: You can read the original story online. 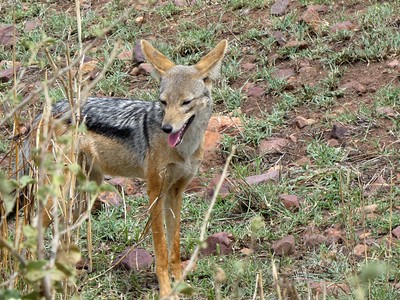