Welcome to Tiny Tales from India. This is a collection of two hundred stories from India, and each story is just 100 words long. 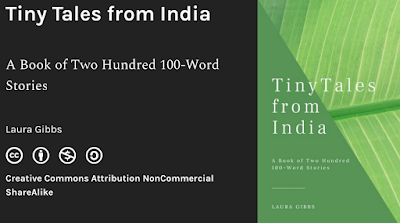 Creative Commons. This work is released with a Creative Commons license: CC BY-NC-SA 4.0. That means you can remix and reuse individual stories or the contents of the whole book with attribution for non-commercial purposes, provided that you release your work with the same license. Find out more.
Attribution: Tiny Tales from India by Laura Gibbs.
Version: July 8 2020.

You can access the book in a variety of formats, along with individual stories here at the blog (see story title list and links below).

Pressbooks. This is a web-based presentation of the book with all the stories on one page. Even better: you can highlight the stories using Hypothesis; just click on the upper right-hand corner for the Hypothesis toolbar.

Audiobook. There is a free audiobook you can listen to via SoundCloud. I've also made the mp3 files available for download if you prefer not to use SoundCloud and/or if you want to repurpose the audio (which is also released with the CC BY-NC-SA 4.0 license).

EPUB. You can use this EPUB file for ebook readers like Nook, etc.

Kindle Store. The Kindle book is available at Amazon for 99 cents (which is the lowest price you can set for a Kindle book; see the MOBI option above for a free Kindle-compatible version).

Print. There is a print version available at Amazon for $5.99, with free Prime shipping (although it's print-on-demand, so it takes about 10 days total).

Randomizer. You can see a story from the book at random, and you can also get the javascript code to add the randomizer to your own blog or website if you want.

Text file. This is a plain text file, no special characters. This option might be useful if you want to repurpose the entire book with your own formatting; see Creative Commons licensing CC BY-NC-SA above.

HTML. If you want to read a web-based presentation without the Hypothesis toolbar, here is a very simple HTML version.

PDF. You can download a PDF copy of the book.

Diigo. If you are interested in searching the contents of the book, then the Diigo bookmark collection might be useful! You can use keyword searches of the #india:book items, Boolean searches, etc. For example: Maya.

This book opens with traditional folktales from the Panchatantra, the Hitopadesha, and the Katha-Sarit-Sagara ("Story-Stream-Ocean"), plus Jataka tales of the Buddha's past lives. You will also find stories of the Indian gods and goddesses, plus parables from Ramakrishna, who was both a sadhu (holy man) and storyteller. The book closes with anecdotes about the legendary jesters Tenalirama from the court of Krishnadevaraya in southern India and Birbal from the court of Akbar in the north. The two hundred stories in this book represent only a tiny fraction of the Indian storytelling tradition. To read more stories from India, visit:
India.LauraGibbs.net

The paragraph you just read about this book is exactly one hundred words long, as is this paragraph, and that's also the length of each story in this book. The stories go fast, but you can slow down when you find one you like. Read it again. Let it sink in. Maybe even write your own version of the story, using your imagination to add more details. Meanwhile, if you don't like a story, don't get bogged down; just move on to the next one. There are more 100-word stories from India, plus stories from other cultural traditions, at:
100Words.LauraGibbs.net 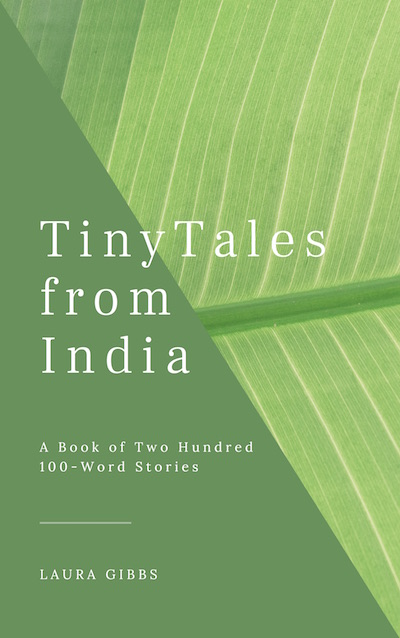