Laura Gibbs · 43. Big-Wit, Half-Wit, and Witless
There were three fish living in a pond: Big-Wit, Half-Wit, and Witless.
Fishermen came to their pond, looking for fish to catch.
Big-Wit realized the danger at once and went swimming through the pond's outlet before the fishermen blocked it up. Thus he made his escape.
Half-Wit was unsure what to do, but finally he pretended to be dead, floating on top of the water, and the fishermen had no interest in a rotten fish carcass.
As for Witless, terror made him splash in the water, so the fishermen seized him and he became fish stew for the fishermen's dinner.
Inspired by: The Tortoise and the Geese, and Other Fables of Bidpai by Maude Barrows Dutton.
Notes: There is a similar Panchatantra story: Forethought, Ready-Wit, and Fatalist (Book 1, part of story 20).

This illustration is from a 15th-century Latin Panchatantra: 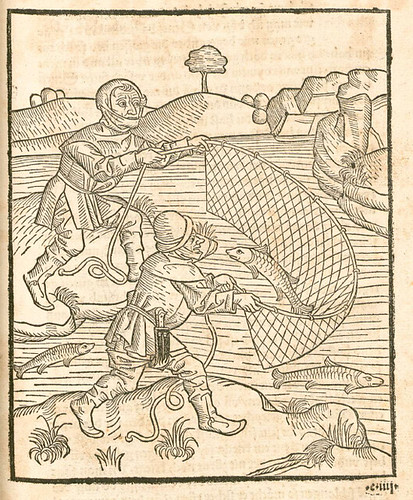