Laura Gibbs · 128. Sunda and Upasunda
There were twin demon brothers, Sunda and Upasunda.
They tormented the whole world, but they honored Shiva devoutly, so Shiva had to grant them a boon.
"We want Parvati!" the demons shouted; Parvati was Shiva's wife.
So, Shiva gave them Parvati.
But then the demon brothers quarreled; each wanted Parvati for himself.
Shiva appeared to them disguised as a brahmin.
"Brahmin, judge between us!" they said.
"You must fight each other," he replied, "to see who is stronger."
Because the demons were equally strong, they killed each other in the fight.
Shiva and Parvati, along with the whole world, rejoiced.
Inspired by: Hitopadesha, or, The Book of Good Counsel translated by B. Hale-Wortham
Notes: It is in Book 4, Story 9. There are many versions of this story. One of the most popular has the demon brothers fighting over an apsara named Tilottama; you can read more at Wikipedia. This sculpture from Cambodia shows the demon brothers fighting: 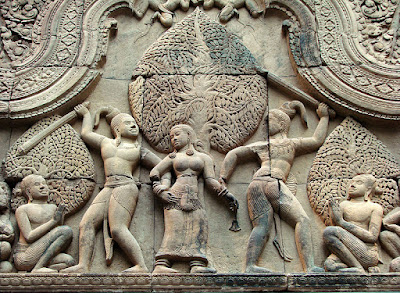