Laura Gibbs · 146. The Hermit in the Forest
A hermit had retired to the forest, setting aside all the cares of the world, and a simple loincloth was his only possession.
But rats came and nibbled holes in the loincloth, so the hermit got a cat.
The cat needed milk, so the hermit acquired a cow.
To care for the cow, he employed a cowherd.
The cowherd wanted a house, so he built a house.
To clean the house, he needed a maid.
The maid was lonely living in the forest, so they built more houses.
The result was a village, and all the cares of the world.
Inspired by: Indian Fables by Ramaswami Raju.
Notes: This is one of the "chain tales" that appears in Stith Thompson's motif index. This painting, attributed to the Mughal artist Basawan, circa 1600, shows a Jain ascetic (Wikimedia): 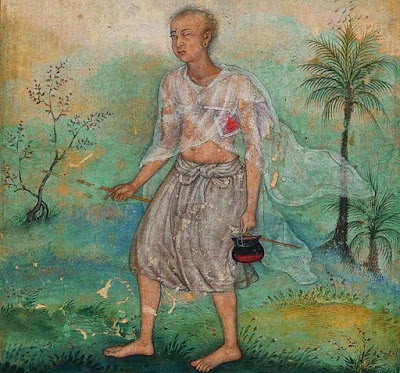