Laura Gibbs · 36. The Bharunda Bird
Have you heard of the bharunda bird? This strange creature has two heads attached to a single body.
One day, a bharunda bird found a flower filled with nectar. The first head drank the nectar eagerly, and the nectar went into their shared stomach. "Delicious!" it said.
"Give me some!" shouted the other head.
"No!" shouted the first head. "I found it; I drink it!"
The second head was so angry that it found a poisonous fruit and ate it.
"Ha!" shouted the head. "That's my revenge."
The poisonous fruit went into their shared stomach, and the bharunda bird died.
Inspired by: The Panchatantra, translated by Arthur Ryder.
Notes: It is in Book 2, Story 2. There is also a two-headed bird in Indian mythology: Gandaberunda. This mighty bird can catch and kill elephants: 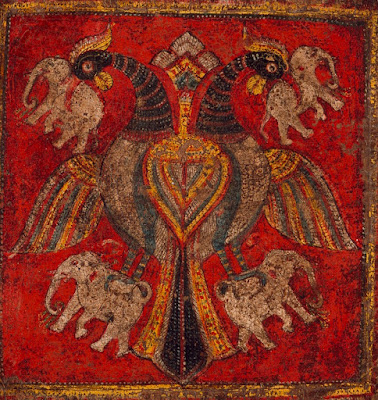