Laura Gibbs · 90. The Quail Chick
The Buddha was born as a tiny quail chick.
The chick lived in a nest, fed by his mother and father, and he could not fly yet.
Then one day, a huge fire swept through the forest, and the mother and father quail flew away in fear.
Because the quail chick could not fly, he summoned the power of his past Buddha lives and spoke forth. “In the name of Truth," shouted the little bird, "I defy you, Fire! Turn back now!”
And so the flames of the forest fire were extinguished by the miraculous power of the Buddha's words.
Inspired by: The Jataka, translated by Robert Chalmers.
Notes: This is the Vattaka Jataka. You can read more about the "act of truth" (saccakiriya in Pali, satyakriya in Sanskrit) at Wikipedia. This story about the quail is included in the Wikipedia article.

Here is an illustration by H. Willebeek Le Mair: 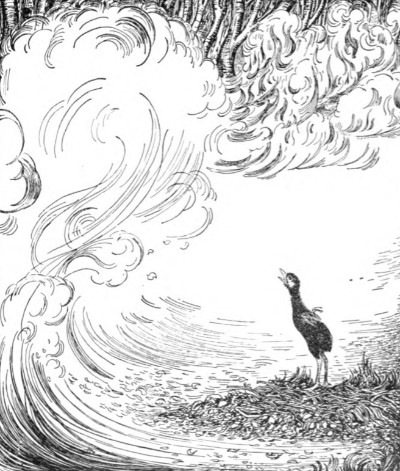