26. The Monkey and the Firefly

Laura Gibbs · 26. The Monkey and the Firefly
A monkey found a firefly.
The evening was cool, so the monkey said, "I'll warm myself by the light of this fire!"
At just that moment, a bird flew by, and she decided to enlighten the monkey. "That's not fire," the bird explained. "That's just a firefly."
The monkey ignored the bird, so she chirped more loudly. "That won't work: a firefly isn't the same as a fire!"
On and on she chattered, making the monkey more and more angry.
Finally, the monkey grabbed the bird and squashed her.
Moral of the story: Be careful when correcting someone else's errors.
Inspired by: The Panchatantra, translated by Arthur Ryder. It is in Book 1, Story 28.
Notes: The story appears in Bidpai also. This story entered the Latin tradition via translations of Panchatantra texts, and so made its way into the works of Ramon Lull, for example (more information here). The story is sometimes told about a whole troop of monkeys instead of just one monkey, as in this video: Fools. 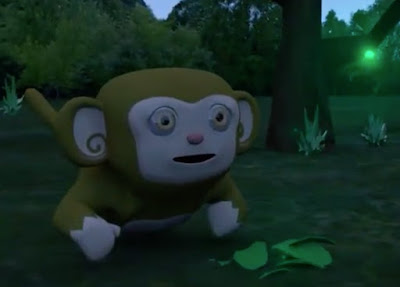 You can find lots of Panchatantra videos at YouTube. Here's another one: Bird and Monkeys.