Laura Gibbs · 47. The Snake and the Frog
A snake and a frog lived in the same pond, and they became friends.
"I’ll teach you how to hiss!" the snake said to the frog one day.
"And I'll teach you how to croak!" said the frog to the snake.
After the snake learned how to croak, he would hide in the reeds and croak just like a frog, luring the other frogs to come near, and then he would eat them.
Eventually, the other frogs learned about the snake’s trick, so the snake had no more frogs to eat.
That’s when he decided to eat his so-called friend.
Inspired by: Indian Fables by Ramaswami Raju.
Notes: Compare the story of the snake and the king of the frogs: The Snake and the Frogs. 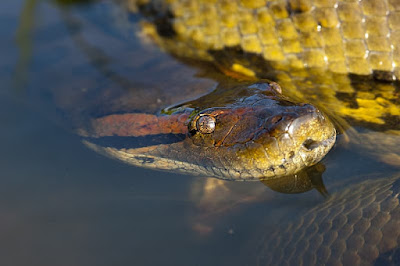