9. The Tiger Cub and the Goats

Laura Gibbs · 9. The Tiger Cub and the Goats
A she-tiger died giving birth.
Wild goats found the cub and cared for him.
The cub ate grass like the goats, bleated like the goats, and thought he really was a goat.
A tiger then attacked the goats and found the cub. "Why are you eating grass? Why are you bleating?" he asked.
"That's what goats do," replied the cub.
"But you're a tiger!" he said.
Then he took the cub to a pond. "Look: that's your face! That's you!"
Thus the big tiger became a teacher to the cub who finally learned how to be a tiger after all.
Inspired by: Tales and Parables of Sri Ramakrishna
Notes: This is story 167 in the book. You can find out more about Ramakrishna at Wikipedia. 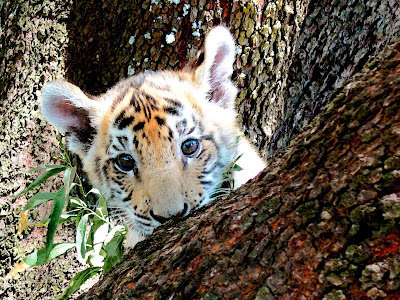