Laura Gibbs · 49. The Snake and the Ants
There was a mighty snake, the terror of the neighborhood. Nobody dared to challenge this snake.
Then one day the snake decided to slither through a narrow space between some rocks, and there he got stuck, bleeding where the rocks had scraped his skin.
Drawn by the smell of blood, the ants began to swam. The ants were tiny, but they came in hundreds. Then in thousands.
The snake squirmed and thrashed as the ants crawled all over him, but there was nothing he could do.
And thus the tiny ants killed the mighty snake, bite by bite by bite.
Inspired by: The Panchatantra, translated by Arthur Ryder. It is in Book 3, Story 6.
Notes: For a story about tiny friends, as opposed to tiny enemies, see The Elephant King and the Mice. 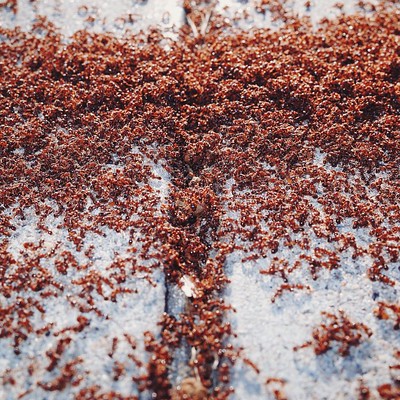