4. A Story for the Lion-King

Laura Gibbs · 4. A Story for the Lion-King
"Tell me a story that goes on forever," the lion king shouted, "or you will all die."
"You're the best storyteller," the animals said to the jackal. "Please save us!"
The jackal smiled and began. "O King, a fisherman went fishing with his net."
"What next?" asked the lion.
"He caught many fish, but the net was torn, and a fish escaped."
"What next?"
"A second fish escaped."
"What next?"
"A third fish escaped."
The lion yawned.
"And a fourth. A fifth… A sixth..."
The lion fell asleep listening to the endless story, and so the jackal saved the animals.
Inspired by: Indian Fables by Ramaswami Raju.
Notes: The "endless story" is Stith-Thompson Tale Type 2300, and it is found in many places around the world, but especially in India. There is even a version with Akbar and Birbal: Birbal Tells an Endless Story. Raju tells the story about a fox, but I changed it to a jackal, who appears more frequently than the fox as the lion's chief courtier. 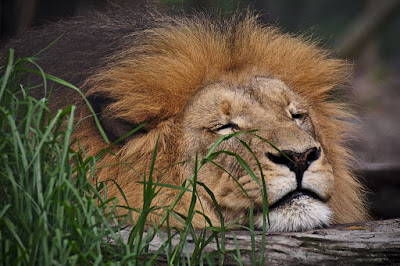