96. The Swan with the Golden Feathers

Laura Gibbs · 96. The Swan with the Golden Feathers
The Buddha was born as a man who had a wife and children.
When the man died, he was reborn as a swan with golden feathers.
The swan flew home and gave his wife a feather. “I'll return soon and give you more,” he promised.
But when he returned, his wife plucked all his feathers.
“Wicked woman, what have you done?” he cried, and the feathers in her hands became ordinary white swan feathers.
The wife threw the plucked swan into the garbage.
Then, when the Buddha's feathers grew back - white now, not golden - he flew away and never returned.
Inspired by: The Jataka, translated by Robert Chalmers.
Notes: This is the Suvannahamsa Jataka. The "hamsa" is a mythical bird of India, translated into English as goose or swan. You can find out more at Wikipedia, and there is a collection of variations here: Golden Fowls. Here is an illustration by Ellsworth Young: 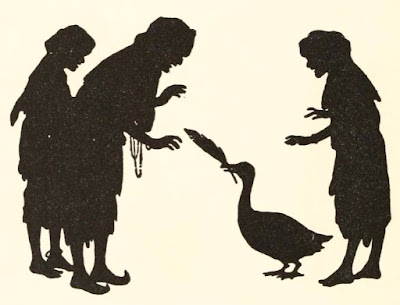