Laura Gibbs · 141. Ganesha and Kartikeya
Kartikeya and Ganesha sat beside their mother, Parvati, who was wearing a necklace of beautiful jewels.
"My sons," she said, "I will give this necklace to the one who circles the Universe most quickly."
Kartikeya leaped on his peacock and flew off, certain he would win the race. "I'm so much faster than my fat brother with his elephant head!" he thought to himself.
Ganesha, meanwhile, walked in a circle around his mother and bowed down before her reverently, knowing she contained the whole Universe.
When Kartikeya returned, he saw Ganesha sitting beside Parvati, and he was wearing the necklace.
Inspired by: Tales and Parables of Sri Ramakrishna
Notes: This is story 78 in the book. This famous legend about the race between Ganesha (whose vahana is a mouse or rat) and his brother Kartikeya (whose vahana is a peacock) is usually told about a competition to win a fruit, and Ganesha wins by circling "his world" three times, that world consisting of Shiva and Parvati. I like this Goddess-centered version by Ramakrishna even better. Compare the story of Parvati as embodying all creation: Ganesha and the Cat. 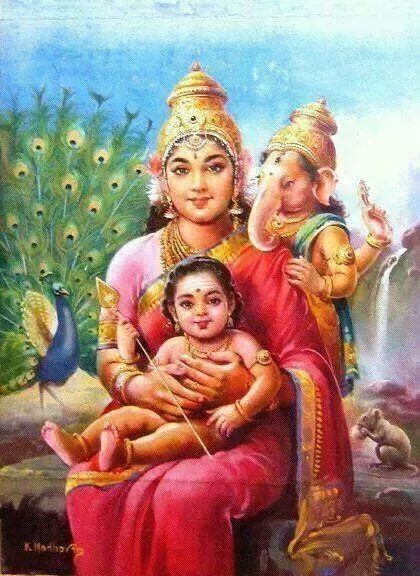