82. The Jackal in the Elephant

Laura Gibbs · 82. The Jackal in the Elephant
In another lifetime, the Buddha was again born as a jackal.
One day, this jackal found an elephant carcass.
“Food!” he shouted happily.
He gnawed the elephant's trunk; not much meat there.
The tusk was like bone.
The ear was tough.
The feet were hard as rocks.
Then the jackal crawled inside where the meat was soft to eat. He stayed in there for days.
Meanwhile, the summer heat made the carcass shrink.
The jackal couldn't get out. He was trapped!
Finally it rained.
As the carcass expanded again, he escaped.
“I'll never be so greedy again!” the Buddha vowed.
Inspired by: The Jataka, translated by Robert Chalmers.
Notes: This is a Sigala Jataka. For another Sigala Jataka, see the story of the jackal and the would-be corpse. 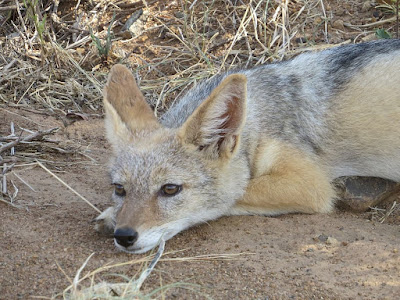