Laura Gibbs · 31. The Crab's Advice
There were two herons who lived in a tree, and at the foot of the tree was a snake.
One day, the snake ate the herons' chicks.
"We need help!" said the father heron.
"Let's ask the crab for advice," said the mother heron.
So they went to see the crab.
"You should scatter some fish from the mongoose hole to the snake hole," said the crab. "The mongoose will follow the fish and eat the snake!"
The herons did what the crab advised.
The mongoose ate the snake as they had hoped, but then it ate the herons too.
Inspired by: The Panchatantra, translated by Arthur Ryder. It is in Book 1, Story 30.
Notes: The version in Bidpai is about frogs instead of herons. Compare the story of the crow and the snake: The Crow's Revenge.

The birds here do not look much like herons, but you can see the crab giving advice in this 15th-century Panchatantra: 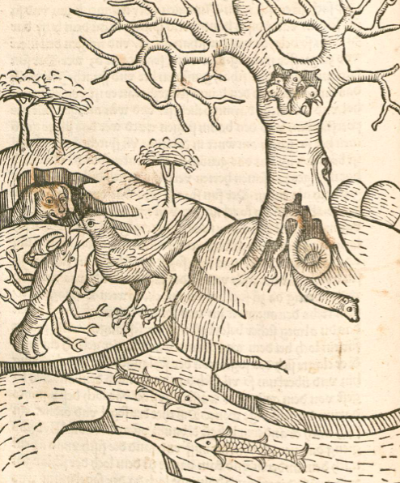