Laura Gibbs · 45. The Frog in the Well
A frog was born in a well and lived there all her life.
Another frog was born and lived in a lake.
The lake-frog went exploring, and when she hopped up on the edge of the well, she fell in.
She tried to tell the well-frog what the lake was like. "It's big!" she said.
"As big as this?" asked the well-frog, hopping from one side of the well to the other.
"Bigger!" said the lake-frog.
"But there's nothing bigger than the well. You've lost your mind!" shouted the well-frog. "That 'lake' is something you dreamed; it can't be real."
Inspired by: Tales and Parables of Sri Ramakrishna
Notes: This is story 203 in the book. You can find out more about Ramakrishna at Wikipedia. I gendered the frogs as female because there's no reason why animals in parables always have to be male (I don't know what the gender of the word for "frog" is in Bengali...). Ramakrishna tells the story about the Ocean, rather than a lake; the Ocean is a crucial metaphor for Ramakrishna in general, as in the story of The Salt Doll. 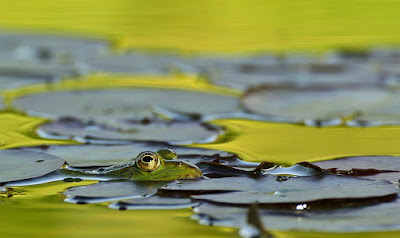