Laura Gibbs · 70. The Louse and the Flea
There was once a louse who lived in the king's palace.
She grew fat sucking on the king's blood, but because she nibbled gently, the king never realized she was there.
It was a good life.
One day, a flea dropped in. "What a nice bed this is!" he said.
The louse protested. "The king will feel your unfamiliar bite. Go away!"
But the flea didn't go away, and he bit the king while he slept.
The king was furious, and he called his servants to come inspect the bed. The flea escaped, but the louse was caught and killed.
Inspired by: The Panchatantra, translated by Arthur Ryder. It is in Book 1, Story 13. There's also a version in Venkataswami's Folktales.
Notes: Through its inclusion in the Panchatantra, this fable became part of the Latin tradition also: Pulex et Pediculus. Here is an illustration from the medieval Aesop: 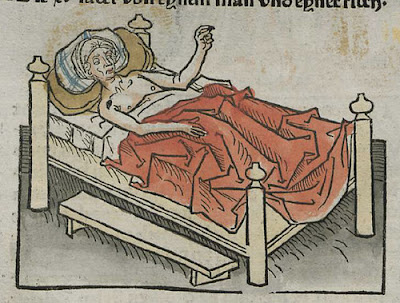