Laura Gibbs · 109. The Lizard on the Tree
There was a tree in the center of a village.
One man told another about the green lizard he saw on the tree.
"It's not green!" said another man. "I saw that lizard, and it's red."
Another man chimed in. "No, the lizard is brown."
Or black or orange or yellow.
The people were all arguing about the color of the lizard.
Finally, they went to the tree and found a man sitting there, a stranger to the village. He explained to them about the chameleon's many colors, and then he added, "In the same way, people argue about God."
Inspired by: Tales and Parables of Sri Ramakrishna
Notes: This is story 128 in the book. Compare the Buddhist jataka of the flowering Tree seen at different times of the year: Kiṃsukopama-Jātaka. You can read more about chameleons at Wikipedia: "Different chameleon species are able to vary their colouration and pattern through combinations of pink, blue, red, orange, green, black, brown, light blue, yellow, turquoise, and purple." 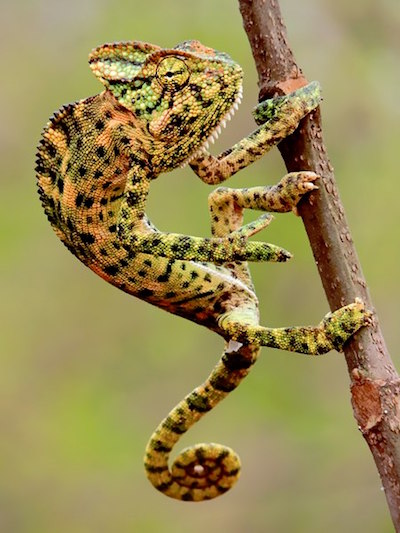