Laura Gibbs · 50. Deer, Tiger, and Crocodile
A deer had gone to drink, and a tiger lay in wait in the bushes nearby.
"That deer will make a delicious meal," the tiger thought.
Meanwhile, there was a crocodile in the water who also had his eyes on the deer.
As the deer finished drinking, the tiger leaped, but he missed and fell.
Then, as he tumbled with a splash into the water, the crocodile seized him.
They fought, and both died of their wounds.
The deer, watching the unexpected drama, exclaimed, "It's a good day for the deer when the tiger and the crocodile destroy one another."
Inspired by: Indian Fables by Ramaswami Raju.
Notes: Compare an opposite message in an Aesop's fable about frogs and bulls: The Frogs and the Fighting Bulls. 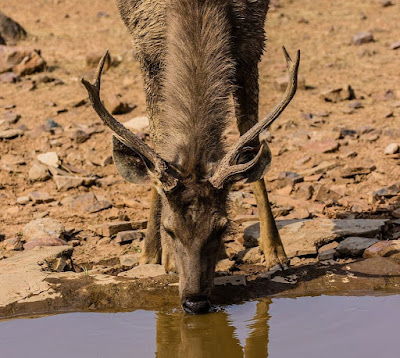