94. The Crow by the Highway

Laura Gibbs · 94. The Crow by the Highway
The Buddha was born as a bird and became their king.
There was a crow who hopped along the highway, eating the food that humans dropped there.
The bird-king warned all the birds that the human highway was dangerous, but the crow kept going there anyway, greedy for food.
One day as the crow was eating, she saw a caravan coming down the highway. “I’ll fly away soon!” she said, but she kept on eating... and so she was crushed under the wheels of a wagon.
“The highway is dangerous," said the Buddha, "but being greedy is even more dangerous."
Inspired by: The Jataka, translated by Robert Chalmers.
Notes: This is the Anusasika Jataka. 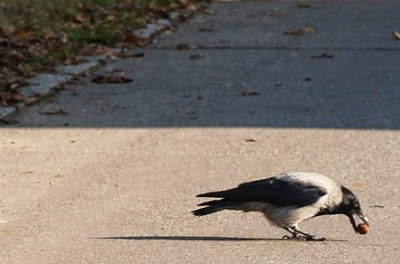