Laura Gibbs · 93. The Birds in the Tree
The Buddha was born as a bird and he lived together with a flock of birds in a mighty tree; the Buddha was the king of these birds.
The branches of the tree where the birds lived began to grind one against the other, producing sparks and smoke.
The king realized that this was the beginning of a fire, so he warned all the other birds. “We must fly away now!” he told them.
The wise birds listened, but the foolish birds ignored the Buddha's words.
The whole tree caught on fire, and the foolish birds perished in the flames.
Inspired by: The Jataka, translated by Robert Chalmers.
Notes: This is the Sakuna Jataka. In the traditional version, the foolish birds make fun of the Buddha by invoking this saying: "It is always like this with him; he's always seeing crocodiles in a drop of water." 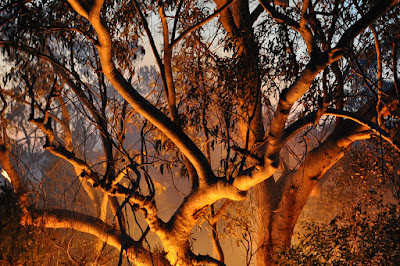