Laura Gibbs · 136. Garuda and the Snake-Man
Fleeing the eagle-god Garuda, a snake disguised itself as a man and sought refuge with a prostitute.
"I charge one hundred elephants!" she said, just joking, but the snake-man conjured the elephants with magic.
The woman was amazed. "Who are you?" she asked.
The snake-man told her everything, but swore her to secrecy.
Garuda disguised himself as a man and also came to the prostitute's house.
"I already have a customer, and he paid a hundred elephants," she said, boasting. Then she added, "Don't tell anyone, but he's a snake!"
Garuda thus found the snake-man, killed him, and ate him.
Inspired by: The Ocean of Story by Somadeva, translated by C.H. Tawney: Volume 5.
Notes: This is Story 99. In the story, the woman tells her bawd, and the bawd tells Garuda, but I left the bawd out. For more on Garuda and his enmity with the snakes, see Wikipedia. 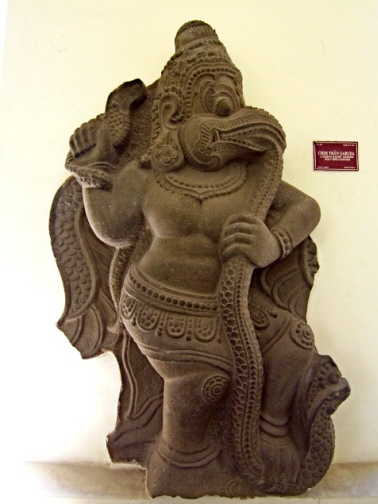