Laura Gibbs · 198. A Story about Tenalirama
The royal painter decorated the palace walls with Ramayana murals. Tenalirama scoffed. "Where's the rest of Lakshmana?" he asked, pointing to one figure.
"That's a profile!" replied the painter. "You have to imagine the rest."
"I will decorate the summer palace with my own Ramayana paintings!" boasted Tenalirama.
A month later, he was done. The king came to see ... and there were only noses. Everywhere! Noses painted all over the walls!
"What is this?" he shouted angrily.
"Well, this is Rama, of course. And Sita, Lakshmana..." Tenalirama pointed out each nose one by one. "You have to imagine the rest."
Inspired by: The Wit of Tenali Raman by Devika Rangachari
Notes: This story is on p. 34 of the book. In the original story he painted noses and legs and arms and various body parts; I changed it to just noses in honor of his encounter with Kali: Tenalirama and Kali. This story appears in Tiny Tales of India. 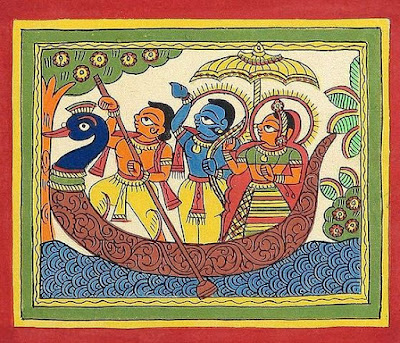