Laura Gibbs · 192. The Statues Speak to Rama
Some say that Rama had a new golden statue of Sita made for every sacred ritual. Then, after each ritual, the golden statue would be installed in a special temple.
One day Rama went to visit the temple, and the golden statues of Sita all called out to him. "Husband!" they cried. "Husband! Who will take care of us when you depart this earth?"
"I will see you again," Rama promised, "and we will be reunited in love during my next lifetime."
In his next lifetime, Rama would return as Krishna, and the golden statues would be Krishna's beloved gopis.
Inspired by: Golden Sitas become gopis.
Notes: I don't have any idea how old this story is; I found it at a website online, and I liked it. 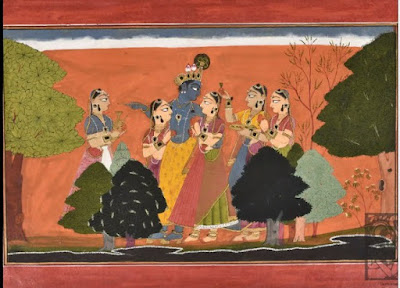