Laura Gibbs · 189. Sita Arrives
Valmiki brought Sita to Ayodhya and presented her to Rama. "Here is the blameless woman you exiled because of gossip," said Valmiki. "And these boys are your sons. Now Sita will again prove her innocence."
Sita kept her eyes fixed on the ground. "If I was loyal to Rama, thinking of no one else," she said, "let the earth-goddess Bhumi receive me."
The goddess arose from under the ground, seated on a shining throne. Bhumi took Sita in her arms, and then they sank back down, and the ground closed over them.
The gods rained down flowers in Sita's honor.
Inspired by: Valmiki's Ramayana.
Notes: This is the Uttara Kanda (Book 7), sarga 87.  The goddess that Sita invokes is Vasundhara. In his book Sita, Pattanaik refers to an Assamese Ramayana in which Hanuman goes into the underworld to convince Sita to return to Rama. He also mentions the Sitamai temple at Karnal in Haryana which, supposedly marks the spot where Sita entered the earth. 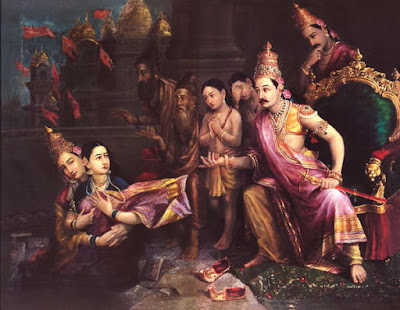 Sita goes into the earth