Laura Gibbs · 197. Rama Departs
After Lakshmana departed, Rama was overcome by grief.  "Bharata will now be king," he declared.
Bharata, however, refused. "I have no wish for the kingdom without you in it," he said. "You should crown Kusha and Lava instead."
So the boys became the kings of Ayodhya, and Rama left the city. His bow and his arrow took on human form and walked with him. His brothers Bharata and Shatrughna followed, along with all the people of Ayodhya.
Rama stepped into the Sarayu river, and the devas applauded. "Welcome, Rama!" they shouted. "Come, Vishnu!"
So Vishnu returned at last to heaven.
Inspired by: Valmiki's Ramayana.
Notes: This is the Uttara Kanda (Book 7), sarga 97. 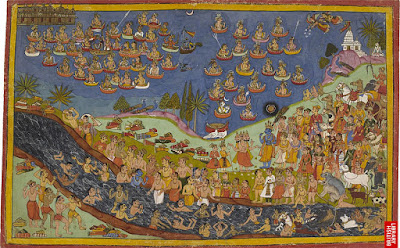