Laura Gibbs · 141. Who Destroyed the Bridge?
The bridge soon reached halfway to Lanka.
But then, during the night, sea-monsters destroyed the bridge. In the morning, they saw the sea-monsters splashing in the ruins, dragging away the rocks.
"I'll find out who did this!" Hanuman shouted. He dove down into the water. There he found a palace, and inside the palace he found the mermaid Suvannamaccha.
"Ravana asked me to destroy your bridge," she said. "But you are a very handsome monkey. I like you! My creatures will help repair the bridge. Forgive me, please!"
Hanuman smiled at the mermaid.
Later, she would bear his son: Macchanu.
Inspired by: Sita: An Illustrated Retelling of the Ramayana by Devdutt Pattanaik.
Notes: This story is on p. 214 of the book. The story of Suvannamaccha is found in the Thai Ramakien and other south Asian vesrions of the Ramayana. Sometimes she is Ravana's daughter. Hanuman and Suvannamaccha become lovers, and Hanuman later meets his son Macchanu when he goes to rescue Rama and Lakshmana from Mahiravana. In the Adbhuta Ramayana, Hanuman's sweat impregnates a sea creature and he gives birth to a son that way. 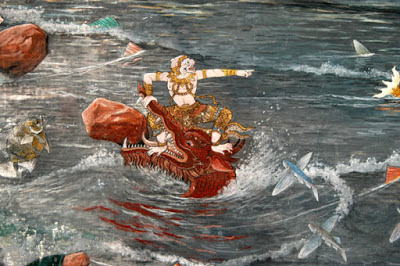