Laura Gibbs · 142. Rama Marches to Lanka
When they finally finished building the bridge, Rama led his army of monkeys and bears on their way to Lanka.
But Ravana was watching! Before Rama and his army could enter Lanka, he shot two massive arrows that destroyed each end of the bridge.
Rama's army could not go forward or backward, and hungry sea-monsters were swarming in the waters around them.
"Help us, Hanuman!" shouted Rama.
The mighty Hanuman leaped to Lanka and then enlarged himself, expanding his tail to span the gap.
Rama's army then marched over Hanuman's tail into Lanka.
Rama had thwarted Ravana's plans once again.
Inspired by: Sita: An Illustrated Retelling of the Ramayana by Devdutt Pattanaik.
Notes: This story is on p. 216 of the book, and it comes from the Thai Ramakien and other southeast Asian Ramayana legends. Pattanaik suggests an influence of the Jataka story of the noble monkey-king who makes his body into a bridge of safety between two trees for his monkeys. 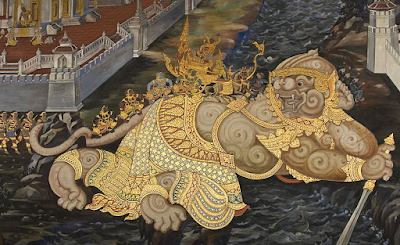