Laura Gibbs · 140. A Woman's Body Washes Ashore
One morning, they saw something floating in the water... a woman's body, tangled in the seaweed.
Lakshmana ran up. "It's Sita!" he wailed in horror.
Rama came running, and the princes wept, stricken with grief.
But Hanuman was suspicious. He built a pyre, put the body on top, and set it on fire.
"Stop, Hanuman!" Rama shouted. "What do you think you are doing?"
Before Hanuman could answer, the supposed corpse rose up and shrieked.
"It's not Sita!" said Hanuman. "This is Benjakai; I saw this evil sorceress in Ravana's palace."
Howling in defeat, Benjakai fled back into the ocean.
Inspired by: Sita: An Illustrated Retelling of the Ramayana by Devdutt Pattanaik.
Notes: This story is on p. 210 of the book. The episode comes from the Thai Ramakien where Benjakai is the daughter of Vibhishana, and Ravana has forced her to engage in this plot. Vibhishana is prepared to execute her, but Rama spares her and sends her back to Lanka. She becomes Hanuman's lover. 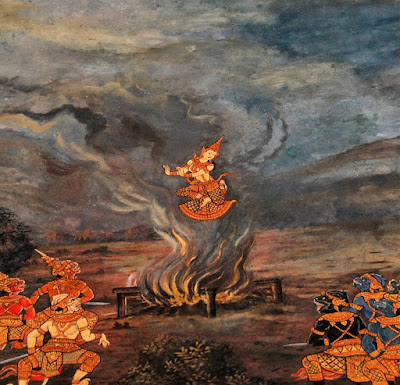