Laura Gibbs · 31. Vishvamitra Arms Rama
Vishvamitra prepared Rama by giving him many weapons. There were deadly discs and spears, maces and lassoes, plus the divine weapons called astras, unleashed by the power of the mind.
Vishvamitra gave Rama weapons with which he could fight not just rakshasas, but also gandharvas and nagas, asuras and danavas, all possible enemies.
Rama received the weapons, and Vishvamitra recited the mantras that Rama would need to unleash this arsenal of supernatural power. Rama learned all the mantras.
The weapons then spoke to Rama with human voices. "We are yours to command," they said, "and we will keep you safe."
Inspired by: Valmiki's Ramayana
Notes: This is the Bala Kanda (Book 1), sarga 27. 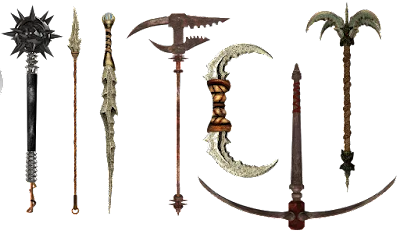 (maces and other weapons)