Laura Gibbs · 20. The Wives of Dasharatha
King Dasharatha of Ayodhya married Kaushalya, princess of Koshala. She gave Dasharatha a daughter, Shanta, but not a son.
Dasharatha then went to King Ashwapati of Kekaya and asked to marry his daughter Kaikeyi, for he had heard a prophecy that a princess of Kekaya would give birth to a great son. "I will make your daughter's son king after me," Dasharatha promised. But Kaikeyi did not give Dasharatha any children.
Dasharatha then married Sumitra, hoping a woman who was not of royal birth would give him a son, but Sumitra likewise could not give Dasharatha a child.
Dasharatha despaired.
Inspired by: Sita: An Illustrated Retelling of the Ramayana by Devdutt Pattanaik
Notes: This story is on p. 10 of the book. Shanta resurfaces in the story of Rishyasringa. It is not clear what Sumitra's origins were, but she does not have a princess-name as Kaushalya (Kosala) and Kaikeyi (Kekaya) do. Perhaps she was the daughter of Dasharatha's charioteer, Sumantra. 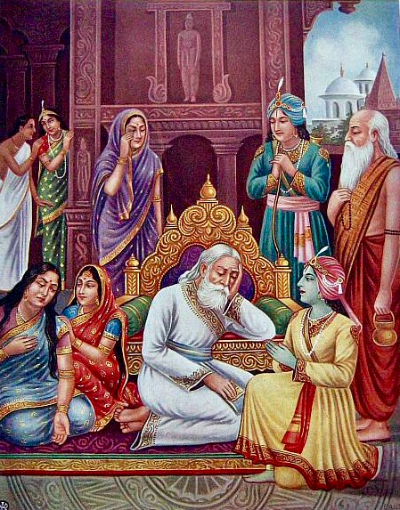 Dasharatha despairing
(this shows him despairing over Rama's exile)