Laura Gibbs · 7. Meghanada Becomes Indrajit
Ravana and Mandodari's first-born son roared like thunder, so they named him Meghanada, "Cloud-Roar."
Meghanada became a warrior, and in his father's war against the gods, he used a spell of darkness to make himself invisible. That is how he ambushed Indra, King of the Devas, and captured him.
"Free Indra, and I'll grant you a boon," Brahma told Meghanada.
"Make me immortal!" Meghanada replied.
"I cannot do that," Brahma replied.
"Then give me invincible weapons. I will win my own immortality in battle!"
Brahma agreed, and Meghanada freed Indra. Brahma then gave Meghanada his new name: Indrajit, the Conqueror-of-Indra.

Inspired by: The Ramayana (Uttara Kanda, 29).
Notes: In the next chapter, Brahma tells the story of Ahalya, explaining to Indra that his crimes at that time led to his defeat in battle. In Pattanaik's Sita, he recounts a different legend about Meghanada's name: Mandodari must abandon her child who is destined to kill her husband, so Vibhishana replaces that child with an infant made out of clouds; this story comes from the Serat Khanda, the Javanese Ramayana. 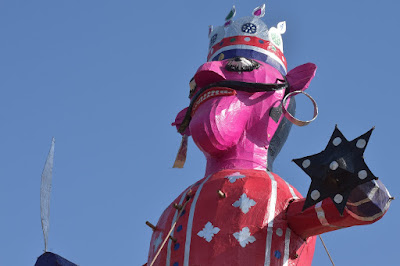