Laura Gibbs · 17. Ravana and the King of the Haihayas
Ravana was sacrificing to Shiva on a riverbank, singing and dancing in Shiva's honor.
Meanwhile, Kartavirya, Thousand-Armed King of the Haihayas, was relaxing in the river with his wives. As Kartavirya splashed, the waters rose and the flood carried away Ravana's offerings.
Enraged, Ravana fought with Kartavirya in a ferocious battle. Finally, Kartavirya knocked Ravana to the ground, and the devas watching from heaven rejoiced.
Ravana's grandfather Pulastya pleaded with Kartavirya to let Ravana go. Out of respect for the great rishi, who was a mind-born son of Brahma, Kartavirya agreed.
Ravana was strong, but there is always someone stronger.

Inspired by: The Ramayana (Uttara Kanda, 31-33).
Notes: This episode covers several chapters, with the fight between Ravana and his ministers versus King Arjuna and his ministers told in elaborate detail. You can read more about Kartavirya Arjuna at Wikipedia. 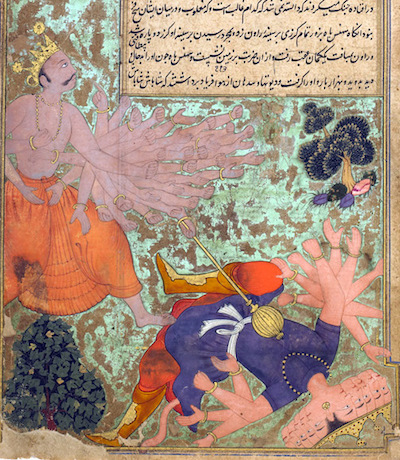