Laura Gibbs · 96. Hanuman Finds a Guru
As he grew, Hanuman sought wisdom. He learned all he could from books and wanted to learn more.
He asked Surya, the sun-god, to be his guru, but Surya refused. "I must travel all day," Surya said. "I don't have time to stop for lessons."
"I will run backwards, never stopping, so that I may learn from you," said Hanuman.
Thus Surya became Hanuman's guru, and Hanuman's face was burned black from looking directly at the sun.
Having completed his studies, Hanuman wanted to give Surya the guru-gift.
"Look after my monkey son, Sugriva," said Surya.
So Hanuman befriended Sugriva.

Inspired by: The Ramayana (Uttara Kanda, 36), and also a Hanuman tale reported by Philip Lutgendorf: Hanuman's Tale, story 6 — Hanuman's Education.
Notes: For the story of Hanuman's earlier attack on Surya, see The Birth of Hanuman. The gift that the pupil traditionally gives to the guru is called guru-dakshina. In Devdutt Pattanaik's book Sita, he mentions a legend that Hanuman extinguished the fire burning his tail by putting his tail in his mouth, and the soot made his face black (p. 202). 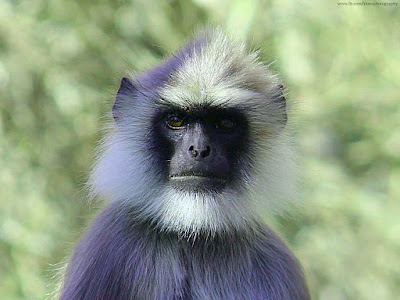