Laura Gibbs · 95. Hanuman Grows Up
Having received boons from the devas, Hanuman grew up to be a strong and fearless monkey. He was also mischievous! He liked to tease the rishis of the forest, breaking their pots, tearing up their clothes, and interfering with their sacrifices.
Finally the rishis cursed Hanuman. "You will forget all your powers!" they shouted at him, and Hanuman no longer remembered the divine boons he had received.
It was not until he heard the words of King Jambavan years later, on the shore of the ocean, that he remembered the supernatural abilities he would need to carry out Rama's orders.

Inspired by: The Ramayana (Uttara Kanda, 36).
Notes: Jambavan reminds Hanuman of the story of his birth and great powers in Sarga 66 of the Kishkindha Kanda. Even today, mischievous Hanuman Langur monkeys cause all kinds of problems, especially in the cities like Delhi: Langurs of Delhi. 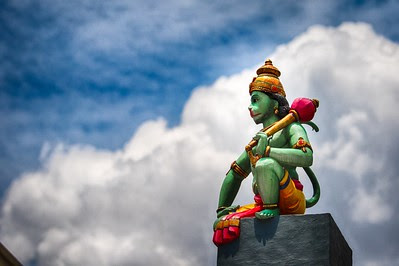