Laura Gibbs · 4. Ravana and Shiva
Dashagriva was riding near Mount Kailasha when an invisible force stopped his chariot.
Before him he saw Nandi, Shiva's bull. "Turn back, Dashagriva!" Nandi shouted. "This is Shiva's home."
"No one can stop me!" replied Dashagriva. To demonstrate his power, Dashagriva extended his twenty giant arms and lifted up the mountain.
Shiva saw this and laughed, and then he pressed down on the mountain with his big toe, trapping Dashagriva underneath.
Dashagriva screamed, and the mighty roar impressed Shiva.
"What a fine voice!" Shiva declared. "I will free you from the mountain, and henceforth you will be called Ravana, He-Who-Roars."

Inspired by: The Ramayana (Uttara Kanda: Sarga 16).
Notes: This story is called the Ravananugraha, and in some versions Ravana wins his release by singing a song in Shiva's honor. More about that at Wikipedia. 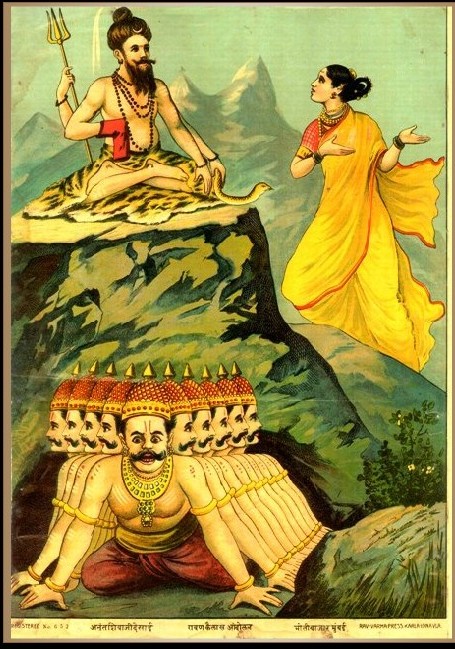