Laura Gibbs · 12. The Gods in Disguise
A king named Marutta was conducting a sacrifice. There were many priests in attendance, along with the devas Indra, Yama, Kubera, and Varuna.
Ravana showed up, and the terrified gods disguised themselves as animals: Indra became a peacock, Yama a crow, Kubera a lizard, and Varuna a swan.
Ravana then challenged Marutta to a fight, but the priests advised the king to surrender.
"I have won!" shouted Ravana. He then ate all the priests, drank their blood, and flew away.
Glad for their escape, the devas bestowed blessings on the animals whose disguises had helped them to escape Ravana's notice.

Inspired by: The Ramayana (Uttara Kanda: Sarga 18).
Notes: The original text goes into more detail about the special boons that the gods give to each of the animals whose disguises they wore. 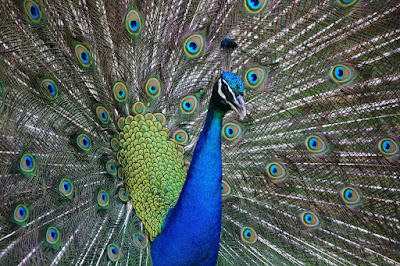