The Leopard and the Duiker

Leopard caught Duiker playing the forest. He sprang, and pinned her to the ground.
"Spare me, O Leopard!" Duiker begged.
"I'll spare if you tell me three true things," said Leopard.
"If I tell my friends I escaped you," Duiker said," they'll call me a liar."
"True!" admitted Leopard.
"If I tell them you asked me riddles, they'll laugh at me," Duiker said.
"Also true! And the third thing?"
"If you were hungry, you would have eaten me already."
"True again, Duiker!" Leopard grinned. "So you're free to go and be laughed at by your friends and called a liar."
Inspired by: "Leopard and Black Deer" in Legends of Liberia by Peter Pinney; this is a story of the Kepelle people.
Notes: You can read the original story online. Compare this story of The Leopard and the Goat, also from Liberia (Vai). The story is told here of "Black Deer," which I assume must mean the black duiker. 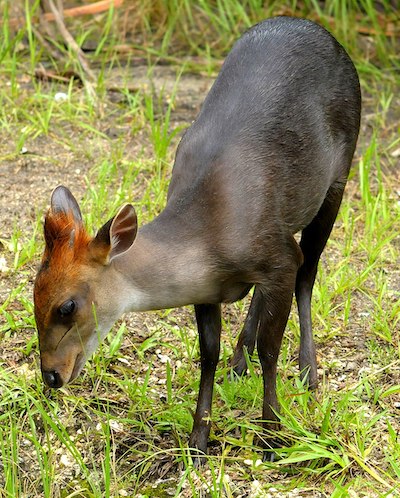