The Elephant and "Big America"

Elephant got himself a long stick — long enough to reach "Big America." He laid the stick on the water and it reached all the way across.
"Listen up, animals!" Elephant said. "Whoever walks across this stick and brings back a leaf from a tree over there will marry my daughter."
All the animals tried: Lion, Bush-Cat, Baboon, but the stick rolled over and sent them plunging into the water before they could reach America.
But then Mongoose tried. He walked softly, very softly, and went all the way to America, brought back a leaf, and married the Elephant's daughter.
Inspired by: "Seah's Story" in Missionary Story Sketches: Folklore from Africa by Alexander Priestley Camphor, 1909.
Notes: You can read the original story online. The author explains that this is a story told by a Kroo storyteller in Liberia named Seah. The hero of the story is "nuh," a small animal like a ferret. I'm guessing it is a mongoose, but I could be wrong. If anyone has information about that, let me know! 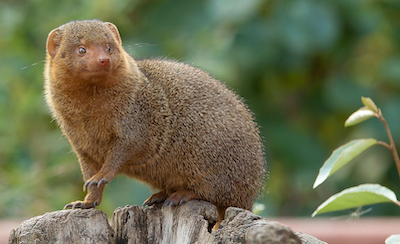