Laura Gibbs · 135. Yuyutsu Chooses a Side
"Anyone fighting for the Kaurava side may come to us now!" shouted Yudhishthira before the battle began.
"And I say the same!" shouted Duryodhana. "Anyone on the Pandava side may join me now."
Of the warriors present at Kurukshetra, only one changed sides at that time: Yuyutsu, Duryodhana's brother. He was the son of Dhritarashtra and Gandhari's maid.
Among Duryodhana's other brothers, the hundred sons of Gandhari, none deserted him, although Vikarna pressed him one last time to make peace. "The Pandavas are our cousins," he said to Duryodhana. "We should not fight them."
But Duryodhana was eager for war.
Inspired by: Jaya: An Illustrated Retelling of the Mahabharata by Devdutt Pattanaik.
Notes: This story is on p. 227. 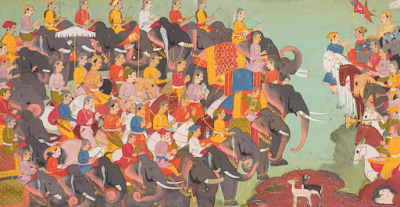