Laura Gibbs · 162. Yudhishthira Confronts Shalya
After Karna's death, Duryodhana appointed King Shalya as supreme commander.
"Only you can kill Shalya," Krishna told Yudhishthira. "Inside him is a demon that feeds on aggression, which means the only way to defeat him is to confront him with love and respect. You alone are capable of this."
So Yudhishthira confronted Shalya on the battlefield with love in his heart, not hatred or anger, thus rendering Shalya's demon powerless. Doing his duty, Yudhishthira then killed Shalya with a single spear-thrust. "Forgive me," he said, weeping, for Shalya was the brother of Madri, uncle to his brothers Nakula and Sahadeva. 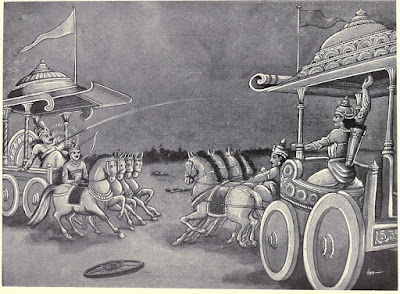