Laura Gibbs · 145. Bhima Pursues the Sons of Gandhari
Bhima had vowed he would kill the hundred sons of Gandhari. Each day, he prowled the battlefield in search of the Kaurava brothers, killing them one by one.
Then the day came when Bhima found himself face to face with Vikarna, the only one of Gandhari's sons who defied Duryodhana. Vikarna had even defended Draupadi in the gambling hall. But out of loyalty to his brothers, Vikarna was fighting on the Kaurava side.
Bhima killed Vikarna, and he wept when he did so.
Krishna, however, did not weep. "Dharma is what matters," Krishna told him. "Not family. Not friends. Dharma."

Inspired by: Jaya: An Illustrated Retelling of the Mahabharata by Devdutt Pattanaik.
Notes: This story is on p. 279. 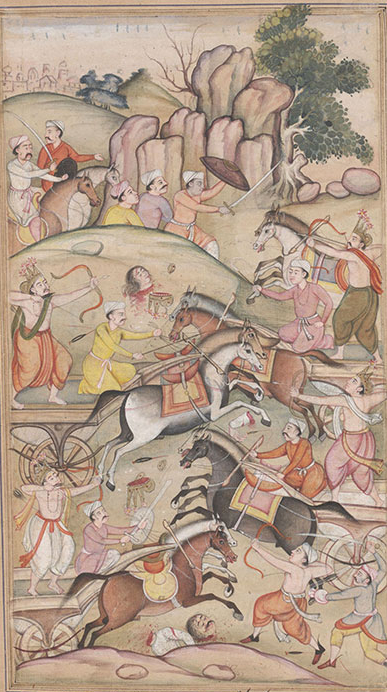