Laura Gibbs · 75. Shishupala Insults Krishna
From among the many illustrious guests at Yudhishthira's coronation, the Pandavas chose Krishna as guest-of-honor.
This enraged Shishupala, King of Chedi. "Krishna isn't even a king! He deserves only contempt, not honor!"
Shishupala went on insulting Krishna, who was his cousin, and Krishna bore his insults patiently, having promised Shishupala's mother long ago that he would accept one hundred insults from her son without complaint.
After the hundredth insult, Krishna said, "Be warned, Shishupala. One more insult, and you will die."
But Shishupala would not stop. "Peasant! Coward! Thief!" he shouted.
Krishna let loose his Sudarshana-Chakra and severed Shishupala's head.

Inspired by: Jaya: An Illustrated Retelling of the Mahabharataby Devdutt Pattanaik.
Notes: This story is on p. 135. There was an oracle at Shishupala's birth predicting that he would die at Krishna's hands, which is why his mother had secured Krishna's promise of forebearance. 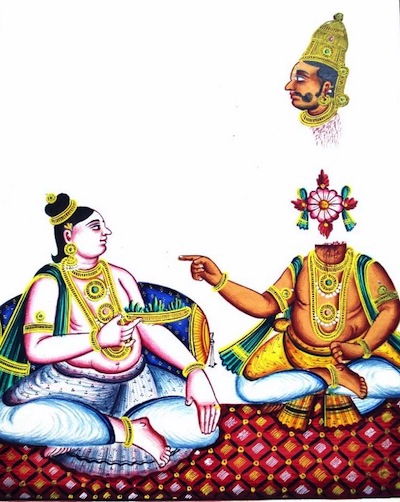