Laura Gibbs · 73. Arjuna Elopes with Subhadra
Arjuna came to Dwaraka, the home of his good friend Krishna.
Krishna's sister Subhadra was deeply in love with Arjuna, but her brother Balarama had arranged for her to marry Duryodhana.
Krishna didn't hesitate: he urged Arjuna to elope with Subhadra. Arjuna entered the city disguised as a beggar. Even in this disguise, Subhadra recognized him immediately, and the two fled the city on his chariot. Subhadra drove the chariot while Arjuna shot arrows at their pursuers.
Krishna was able to soothe his brother Balarama's anger, but not so Duryodhana: the incident only added to his hatred for the Pandavas.
Inspired by: Jaya: An Illustrated Retelling of the Mahabharataby Devdutt Pattanaik.
Notes: This story is on p. 117. 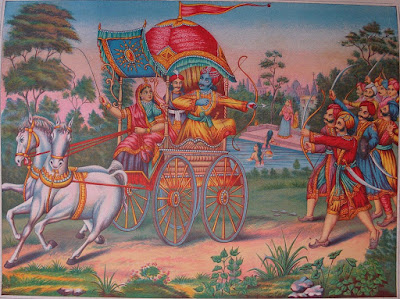