Laura Gibbs · 184. Dhritarashtra Stays in the Palace
Dhritarashtra continued to live in the palace, advising his nephew Yudhishthira, who was now king.
Bhima, however, didn't make it easy. When the family ate together, Bhima would crack his knuckles and reminisce about killing the Kauravas one after another. Whenever anybody broke open a bone to eat the marrow, Bhima would shout, "That reminds me of the sound Duryodhana's thigh made when I smashed it!"
Dhritarashtra's brother Vidura urged him to renounce the world. "Brother," he said, "It's time to go live in the forest!"
Dhritarashtra wanted to go, but he was attached to the luxuries of palace life.

Inspired by: Jaya: An Illustrated Retelling of the Mahabharata by Devdutt Pattanaik.
Notes: This story is on p. 325. 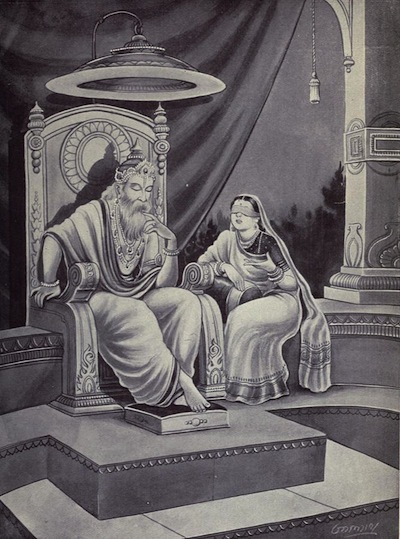