Laura Gibbs · 182. Bhishma Instructs Yudhishthira
The mighty Kaurava generals were all dead... except one: Bhishma. Fatally wounded, he was still alive, lying on the bed made by the arrows that pierced his body.
Bhishma had the power to choose when to die, and he was waiting until after the winter solstice: he wanted to die on the first day of Uttarayana, when Surya turns north.
Bhishma thus waited fifty-eight days, the days growing ever shorter.
Yudhishthira came, and Bhishma instructed him in the ways of kingship, telling him stories of long ago.
Bhishma also taught Yudhishthira to chant the Sahasra-Nama, the Thousand Names of God.

Inspired by: Jaya: An Illustrated Retelling of the Mahabharata by Devdutt Pattanaik.
Notes: This story is on p. 312. 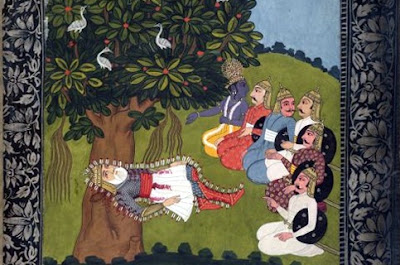