Laura Gibbs · 169. Barbarika Settles an Argument
After the war was over, soldiers in the Pandava camp began arguing about who had won the most glory. "Arjuna!" said some. "No, Bhima!" said others. Finally, as the argument grew more heated, Krishna said, "Let's ask the head."
He meant the head of Barbarika, who had watched the whole war.
They gathered around the head, repeating the claims for the various warriors.
"Arjuna? Bhima?" said the head in surprise. "I saw no warrior but Krishna. Everywhere his Sudarshana-Chakra flew through the air, cutting the unrighteous to pieces, and their blood spilled upon the earth like the tongue of Kali."

Inspired by: Jaya: An Illustrated Retelling of the Mahabharata by Devdutt Pattanaik.
Notes: This story is on p. 286. In other legends, the talking head is not Barbarika but instead Iravan: Iravan Watches the Battle. 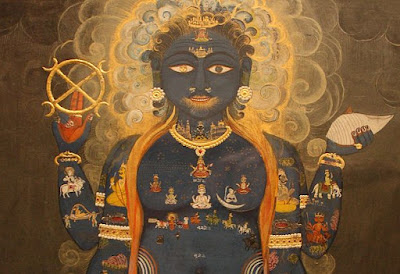