Laura Gibbs · 170. Ashwatthama Makes a Final Vow
Over a billion soldiers died in the war.
On the Pandava side, a few thousand survived.
On the Kaurava side, there were three survivors: Drona's son, Ashwatthama; Ashwatthama's uncle, Kripa; and Kritavarma, a Yadava commander, plus Duryodhana, who lay dying beside the lake where the Pandavas had left him.
The three survivors knelt beside Duryodhana, and they listened to the sounds of rejoicing in the Pandava camp.
Ashwatthama still refused to admit defeat. "I will kill the Pandavas yet!" he vowed.
Duryodhana nodded, unable to resist the force of Ashwatthama's rage. "Do it," he said. "Kill them if you can."

Inspired by: Jaya: An Illustrated Retelling of the Mahabharata by Devdutt Pattanaik.
Notes: This story is on p. 291. 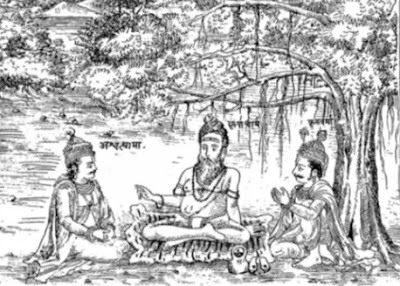