Laura Gibbs · 21. The Brothers Get Married
King Pandu married Kunti, daughter of Shurasena, ruler of the Yadavas. But Kunti bore no children, so after a while Pandu took a second wife, Madri, daughter of King Shalya of Madra. Like Kunti before her, Madri also did not bear any children, and Pandu had no son to succeed him.
Prince Dhritarashtra, meanwhile, married a princess named Gandhari, daughter of King Subala of Gandhara. When she learned that her husband was blind, Gandhari blindfolded herself, vowing that she would share his blindness.
"Let us have children soon!" Dhritarashtra told her, hoping that their son would rule Hastinapura after Pandu.
Inspired by: The Mahabharata: A Shortened Modern Prose Version by R. K. Narayan
Notes: This story is from Chapter 1: The Eighth Baby. The idea that Dhritarashtra was determined to have a son before Pandu did is in Pattanaik's Jaya, p. 44. 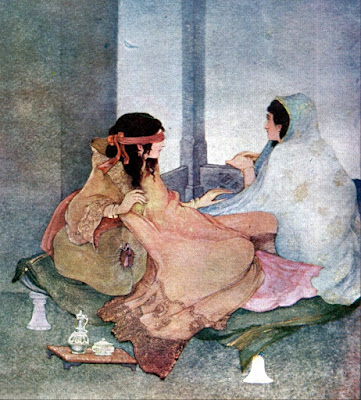